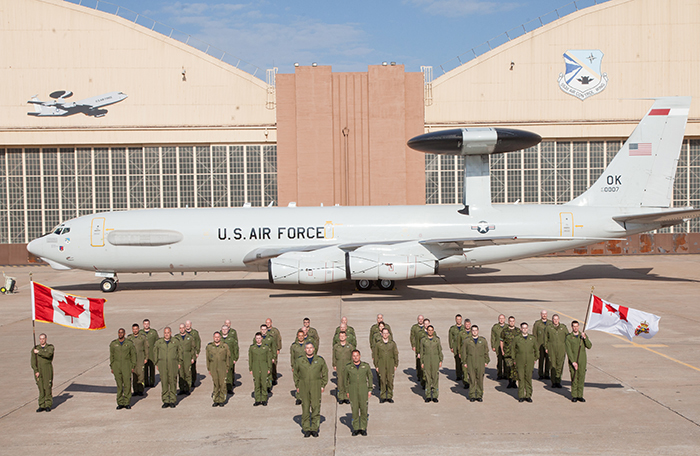 2014 marks the 35th year of Canadian participation in the Airborne Warning and Control System (AWACS) program at Tinker Air Force Base as part of the 552nd Air Control Wing.

In 1979, a handful of Canadians arrived in Tinker, located near Oklahoma City, Oklahoma, to support the North American Aerospace Defense Command (NORAD) air sovereignty mission. At that time, the Canadian detachment comprised 14 Canadian personnel whose duty involved support of continental defence operations, onboard the newly-acquired E-3 Sentry airborne early warning and control aircraft. Under the North American Air Defense Modernization agreement between the United States and Canada, the number of military members stationed in Tinker grew to 43. Most are members of the Royal Canadian Air Force (RCAF), along with some members of the Canadian Army.

Today, those assigned to the Canadian detachment fill 12 of the 13 crew positions aboard the E-3 Sentry, as well as instructor and flight evaluator roles. They are fully integrated into the 552nd Air Control Wing and are assigned to one of four operational squadrons, two training squadrons and an operational support squadron.